Running away from home, Mark finds himself in the world of the Railway. It is a vast world, where trains and passengers act like thoughts in a brain.

The Railway is alive – and someone is trying to kill it.

While being hunted by the Rail Baron’s thugs, he is forced into a dangerous friendship with Helen. Her father was the previous Baron, murdered by the same men who are chasing Mark.

Always trying to run, Mark realizes one thing. If the Railway dies, then he will die with it.

Click the image of the book to see it on Amazon 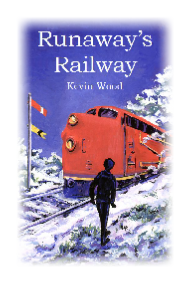