Diary of a Sociopathic Vicar

Arnold Horton – church warden at St James, low intelligence, useless, could be replaced by anyone -murdered by his wife, Abigail.

Detective Inspector Dennis Thorpe – Detective on the murder of Arnold Horton, and in sundry subsequent investigations.

Smiffy – Hells Angel, deceased following head-on collision with a lorry. Buried at St James just before it burnt down.

Porker – one of the local Hells Angels.

Psycho – one of the local Hells Angels. Stabbed through the hand by David Wilson in episode 3.

Ms. Orslow – headteacher of a school of the parish where David Wilson served his curacy - superficially intelligent, bureaucratic, teaches all children the same way while claiming they’re unique. Ineffective.

Marina and Mike - parents of Lucy and Jessica, from the parish of David’s curacy. Lucy is a few years older than Jessica. David visited Jessica every day for a month while she was on the neo-natal ward. Marina and Mike think David is wonderful, although they are not a church family.

Adrian Nelson – journalist from the local paper where David served his curacy. David helped him through a difficult bereavement.

“Sons of Jesus Lemurian” – a secret organisation within the Diocese, that believes, “That Jesus was descended from a race of sorcerers that once ruled the ancient continent of Lemuria, which is how he was able to perform his miracles. By performing certain rituals they’ve discovered, they’ll be able to bring the Church to greatness once more and rise to positions of power.”

Rev. Graham Walters – works for the Diocesan finance office. One of the “Sons of Jesus Lemurian”.

Rev. Canon Torbut Smythe – Rural Dean (deceased). One of the “Sons of Jesus Lemurian”. Murdered by Abigail Horton after visiting the church. Discovered with his head and upper body crushed by falling masonry in the remains of the old church. His trousers were around his ankles, causing some consternation. 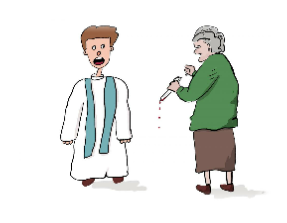